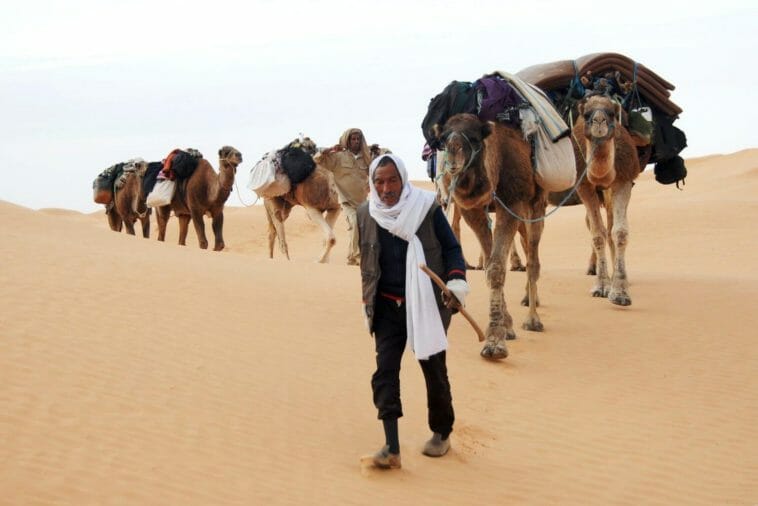 Berber man with his caravane in tunisian desert

Berber Life in the Tunisian Sahara :Desert Holidays And Discovery

A tour of the Sahara desert in Tunisia is the perfect way to learn about Berber heritage and explore the landscape. Douz, a desert Oasis town is known as the gateway to the Sahara and a traditional meeting place for Berber tribesmen. Here, camel rides can be enjoyed amongst the silver dunes whilst at Matmata there are the famous Berber troglodyte cave houses to explore.

Known as the gateway of the Sahara, Douz is an oasis of 800,000 date palms. The town is surrounded by desert dunes which often try and encroach upon it. The locals keep them in place with judiciously planted trees or man-made barriers.
For centuries, Douz was a meeting place for nomadic M’razig Berber tribesmen. Today, it is known for its dates and palm wine but most of its income comes from tourism. The local tribesmen offer accompanied camel rides a short distance into the bleached sands of the Sahara.
This does not mean that Douz has forgotten its desert traditions. The annual festival of the Sahara which occurs for 3 days each Christmas and New Year is a celebration of camel rides, races, and fights as well as traditional Bedouin handicrafts and jewelry.

The Troglodyte Houses of Matmata

About 100km east of Douz is the Berber settlement of Matmata. Situated in an arid desert landscape of scrubland and hills, the settlement is famous for a very particular kind of traditional Berber housing. For Matmata is known for the pit like cave dwellings that give the settlement its name and can be found nowhere else in Tunisia.
These cave houses or troglodyte houses as they are also known seem to grow out of the very landscape. Often invisible from the outside, some believe they developed as shelters from enemies. It is more likely that were shelters against the conditions of the desert. Troglodyte cave dwellings offer much needed cooling shade in the daytime whilst insulating their inhabitants against the cold desert nights.

The houses consist of a 10m deep pit dug out of the ground. The base of this area forms the central courtyard of the house. Rooms are cut into the walls of the courtyard as required. Living and sleeping areas, as well as kitchen and work areas for grinding corn, are situated on the ground floor whilst store rooms are cut into the rock above. These can be reached by climbing using hand holds or ropes.

The core areas of the house are practically invisible from outside. The only signs that they are dwelling places are the whitewashed lower walls, painted to discourage scorpions and a single narrow doorway. Decorated with a blue hand of Fatima to discourage the evil eye, this is the only entrance to the inner living and working areas of the house, which are reached by following a long, tunnel-like passage.

From above, the courtyard area can be seen but not reached. Here is another ingenious feature of the cave house: its water system. Rock cut drains run along the top rim of the excavation, downwards to store water in underground cisterns. Troglodyte cave dwellings may seem primitive but they are in fact very sophisticated and practical.
Despite the advances of modern life, many troglodyte houses in Matmata are still working homes and can be visited through prior arrangement with the owners. 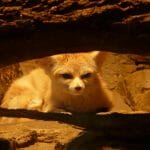 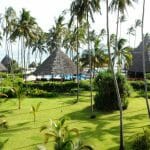