Mammals and Desert Ecology: What Mammals Live in Deserts and How do They Survive?

Desert areas are arid zones due to minimal rainfall. The reason for the lack of rainfall is due to their proximately to tropical zones. Being beside a tropical zone means deserts get little moisture as winds have already dumped their water on the forest regions. This is how the deserts in Australia and southern Africa were formed. Deserts such as the Gobi Desert in China are formed because they are far away from the ocean. The Sahara desert is on the edge of a tropical zone as well as being far from the ocean. Conditions in the desert are harsh. Temperatures during the day are scorching reaching over 40 degrees Celsius (104 Fahrenheit) and water evaporation is high. During the evening the temperature drops as the sun go down and can be near freezing.

Desert plants such as cacti have adaptations to deal with minimal water and to conserve water they do get. These adaptations include drought resistant seeds, reduced foliage and a waxy coating which helps minimize water loss. Desert plants have pores in their leaf or stem epidermis called stomata. Plants are able to open and close their stomata to maximize water gain when it’s available and minimize water loss in dry conditions.

There is huge biodiversity in deserts as there is in any other biome. Some of the mammals found in deserts include:
• Fennec Fox.
• Kangaroo rat.
• Camel.
• Coyote.
• Jack Rabbit.
• Dingo.
• Arabian oryx.

Like desert plants, desert mammals have adaptations to deal with extremes in temperatures and minimal water. To minimize water loss and excess heat, the kangaroo rat remains in a burrow during the day and comes out at night when the temperature is cooler. It also has very efficient kidneys. It excretes highly concentrated urine resulting in a dry fecal pellet due to rectal absorption of water. Water is gained through the dry seeds that form its diet.

Goats living in harsh environments have adapted to such areas by minimizing their maintenance and water requirements with low body mass and low metabolic requirements. This ability to reduce metabolism means that the goats can survive in hot climates despite often prolonged periods of limited food and water availability. These desert goats have adapted a skillful grazing behavior and an efficient digestive system. The rumen serves as a huge fermentation vat and water reservoir.
So while many mammals remain hidden during the heat of the day, there is plenty of biodiversity in the desert and the mammals that live there are all well suited to their habitat. 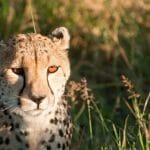 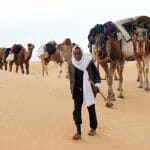