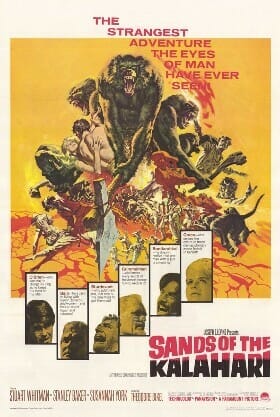 Director CyEndfield and Paramount Pictures brought Sands of the Kalahari to movie theaters in 1965. Stuart Whitman plays a sadistic hunter, with Stanley Baker and Susannah York as his fellow desert survivors.

William Mulvihill’sThe Sands of Kalahari was published by G.P. Putnam’s Sons in 1960. The novel tells the story of six strangers whose survival instincts are put to the test after their small plane goes down in the forbidding Kalahari Desert.
Cy Endfield Directs Sands of the Kalahari
Cy Endfield wrote, directed and co-produced (with Stanley Baker) Sands of the Kalahari for Joseph M. Schenck Productions in association with Pendennis Productions. John Dankworth created the orignal music score, with Erwin Hillier serving as cinematographer.

Sands of the Kalahari Cast

Sands of the Kalahari Movie

A small plane goes down in the Kalahari Desert after an encounter with a horde of locust. Aboard the aircraft are six survivors: the pilot Sturdevan, big-game hunter Brian O’Brien, Dr. Bondrachai, German war vet Grimmelman, mining engineer Mike Bain and the lone woman Grace Munkton.
The struggle for survival is brutish, with the humans competing for scarce food supplies with a pack of wild baboons. In the beginning, Sturdevan positions himself as the group’s leader, but after he is banished following an attempted sexual assault on Grace, the hunter O’Brien moves to the forefront.
O’Brien proves to be a savage, killing Bondrachai and Grimmelman, and then stalking Mike Bain and Grace. O’Brien also harbors an intense hatred for the baboons, who eventually extract their own vengeance.

Sands of the Kalahari opened in New York City on November 24, 1965.
“Entertainment, pure and simple, was evidently what the filmmakers aimed for and that’s the target they hit,” reported Variety.
“…It is largely a question of who can take the Technicolored agony longer, the characters or the customers. Don’t strain yourself,” warned BosleyCrowther of The New York Times (11/25/65).

Film Analysis: Stuart Whitman Is Savage in Sands of the Kalahari

Sands of the Kalahari is one of the more bizarre adventure films of the 1960s. It’s similar to another plane crash/desert survival movie, The Flight of the Phoenix (1965), but with much more savagery.
Stuart Whitman garners top billing in Sands, and the actor doesn’t disappoint as the rugged survivalist who eventually turns his hunting rifle on his fellow survivors. Whitman’s character is both primitively pragmatic and beastly cruel as he eliminates the competition — both human and animal.
The blonde Susannah York is excellent as the tempting divorcee Grace Munkton, with Stanley Baker, Harry Andrews, Theodore Bikel and Nigel Davenport also turning in good performances as the dirty, bedragled crew and passengers.
Viewers will remember — or perhaps even be haunted — by the movie’s shrill ending when the persecuted baboons descend from the rocks and move toward their quarry.

Sands of the Kalahari Trivia, DVD

• Casting possibilities: Richard Burton and Elizabeth Taylor were originally slated to star. George Peppard was signed to play the hunter O’Brien, reported for work in South Africa and abruptly quit the production. Susannah York replaced Suzanna Leigh.
• The plane was traveling from Windhoek to Johannesburg.
• Sands of the Kalahari is not commercially available on DVD though bootleg copies are routinely offered on the Internet. 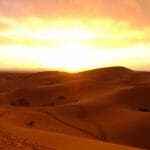 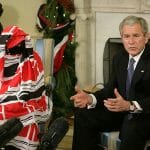