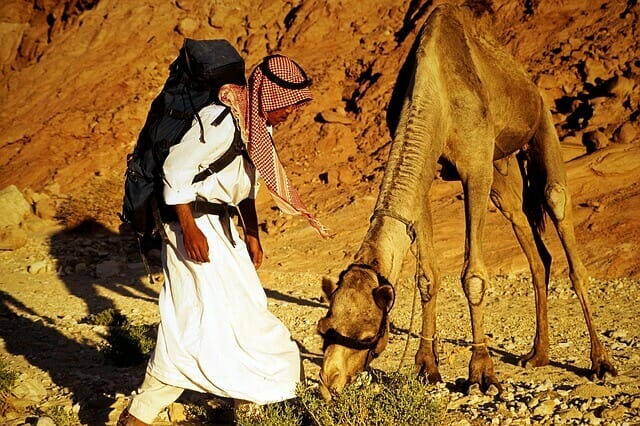 Travelling through the stony Egyptian desert, the holy land of Sinai, the horizon broken by sharp-toothed mountains, the only sign of life is a lone camel stalking away from a dusty faded green “Camel Tours” sign.

Tariq, our guide from Travelways in Sharm El Sheikh, explains that this land is rich in holiness, from the cow-horned Goddess Hathor worshipped by the ancient Egyptians, to the Jewish and early Christian tales of Moses and his struggle to free the Jews from the Pharaoh of Egypt. It is easy to imagine Moses roaming this stony and stark landscape and finding a sign in the ”burning bush”, for this is where we are headed, to St Katherine’s monastery where the actual “burning bush” is said to be located.

The road to the Monastery is one long two-lane highway, winding through the strangely compelling mountains with their deep folds and tucks. The guide enlivens the passengers’ long drive in the small minibus by vividly bringing to life Moses’ struggles, his exile from being Pharaoh’s favourite to his wanderings with tribe of Jethro, his epic battle to free the Jews from the slavery, culminating with the dramatic parting of the Red Sea and the drowning of Pharaoh’s army. It is easy to relate to these thrilling events as we travel through this ancient land which appears not to have changed from those early times.

Our guide also explained how the monastery came by its name. The story is that St Katherine, who lived in Alexandria, was put to death in a spiked wheel ( hence the popular firework, the Katherine Wheel) for refusing to give up her Christian faith. Her body is said to have descended from heaven in Mount Sinai and was taken down to the monastery.

Eventually we see the little town of St Katherine’s, with its small hotel, school and roadblock. We are waved through and finally reach the dusty car park. We have been well informed by our guide about what to what to expect and we all set off with our water and cameras to walk the ten minutes along the dusty road to reach the monastery. Surrounded by the mountains, the view is stunning, the colours of red and sand, with olive and acacia trees appearing as we approach the monastery in its valley between the mountains.

The monastery is built like fortress, with a unique feature – a mosque built inside it, with the minaret tower and the Russian orthodox tower nested together within the walls of the monastery. Apparently the mosque was built by the Muslim ruler at the time to either protect the monastery or to show the population that the Christian faith was not to be feared as nothing happened when the mosque was built. Napoleon Bonaparte visited this monastery and built a large gate in the fortress walls for easy access, and a strange wooden elevator construction that you can still see on the outside of the walls, where, if you were the right type of visitor, you were pulled up. Thankfully we were able to enter the monastery by a small door in the thick stone walls that replaced the larger gate bricked up once the hated Bonaparte departed! Once inside the Greek Orthodox Church we saw the relic of the Saint, the skeleton of her thumb, on display behind glass, and many icons depicting the life of Christ. The ceiling is covered with countless hanging incense burners and we glimpsed a monk in his long black robes.

Once outside the church we were led by Tariq to a small courtyard where he pointed out the evergreen bush that is said to be the actual Biblical “burning bush”. Round the corner he showed us a well that is said to be the one used by Moses as he tended his goats. The walls surrounding this well have scenes from the life of Moses depicted on them.

As we left the monastery, the hawkers and camel owners outside the walls descended on us, but there was little hassle as we declined all offers! Visitors can climb the foothills of the mountains around the monastery or, if they are so inclined, there is a three-hour climb or camel ride up to the summit of Mount Sinai. We settled for clambering up the smooth rocks where the view of the monastery and the mountains is worth the easy five-minute climb.

After the visit to the monastery we were taken to Dahab, a diver’s resort on the Red Sea, with its jumble of old buildings and faded glory. It has an unprepossessing entrance along a rubbish-strewn road, with goats wandering along the streets. Once beyond that, the picturesque promenade along the sea front appears, with small shops and cafes with shaded open areas, cushioned seats and faded sun loungers crammed with young families and divers enjoying the afternoon sun. We were taken to the popular Ali Baba restaurant on the sea front, a spacious restaurant where a superb fish meal was eaten overlooking the sparkling Red Sea.

It was a long day with several hours driving, but that is to be expected in the vast lands of Sinai. It was well worth it, as it brought those Biblical times alive and gave us the experience of the grandeur of the mountains of Sinai.

The cost of this expedition was reasonable, £30 pounds booked through our Olympic Holidays rep, the driver and guide were excellent and the meal at the restaurant in Dahab was included. 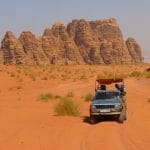 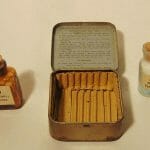