We left direction Addis Ababa Ethiopia but still in Bahir Dar we had to get money. I parked the car directly in the roundabout, because I just wanted to go to the ATM. The ATM did not work, so I had to queue up in the bank.

There were an awful lot of people because the salaries were paid, it was end of the month. I was waiting and waiting, eventually I gave up and went back to the car. Alexandra was already in companion of an Ethiopian police man. He said we are not allowed to park here. Alexandra wanted to drive the car away but the police men did not believe she had a driving license and prevented her from driving away. When I came he was polite and wanted to see my license.

I showed him and he taught me that this was not allowed. I said I did not know, because in Europe that is allowed, which of course was a lie. I only had known I would have lost my license for that in Europe! I apologized of course and this Ethiopian police man let us go without paying. Could you imagine that in Europe? Never! At the next bank we were lucky and left Bahir Dar. After some kilometers on our Afrcan trip we crossed the blue Nile and stopped at Debre Markos at the Hotel Shebel where we could camp in the yard.

Next day in the late afternoon we arrived at Addis Abeba, the capital of Ethiopia. We were looking for Wim’s Holland house, which although we had coordinates it was difficult to find. Wim is an expatriate Dutch married to a young Ethiopian women. They have a campsite, some rooms and a bar with restaurant. The food is delicious. We camped in the yard and did some work as it was raining. Rainy season had started here.

In the morning we walked to the immigration in Addis Ababa Ethiopia, because we had not been sure when our visa will expire. They told us that we still have two months, so everything was fine with our visa.

With visas in general there are different types of depending on the country. Some visas start to count from the day you enter the country, the expire date is only the period in which you have to enter the country, from that date the 90 days start to count. But there are other countries where the visa starts already with the date of issue, independent from when you enter the country de facto.
After that we got our COMESA at the Insurance company, it is an insurance valid in whole east Africa and had to be shown at police controls. It was not expensive and did not take a long time. Back at the campsite we were on our computers when a Swiss couple, on an African trip as well, arrived with their Land Rover.
Michel and Lorenz did the same route as we did, but they were much faster because Michel had to start work again. That remind us that also Alexandra had to start work very soon and it became more than clear that we will not make it until Cape Town. Anyway we had some drinks with the Swiss, and a bottle of Whiskey and we fell to bed rather early.

Next day we had to do some shopping, we needed dog food which was not available in Addis Ababa but cat food. Never mind Tara is like a house pig she does not care if the food is for dogs or cats. We wanted to go for the Kenya visas but it was public holiday, so we had to do that the next day. We were enjoying the day at Wim’s bar and were having fun with the Swiss. The motor bike couple Gerhard and Sybil arrived which we had met first in Bahir Dar. They were joining us and they told their stories what they had experienced.

With the biker couple we shared a taxi to the Kenyan Embassy. We applied for visas, it was 300 Birr. After that – supermarket and to the Sheraton Hotel, because they had fast Internet. We had a cup of coffee there, an really impressing building full of NGO people.

Alexandra and I discussed our schedule. It was more than clear that we will not make it from Addis until Cape Town in time. She wanted to continue our African trip, but the only solution would be to get another 6 months off from her work, which would not be realistic, so the other possibility would be to quit her job.
Not an easy decision after all that years in the hospital. As much as she liked her job, there was time to do other things as well and she was really fighting hard what to do and how to decide. Without a decision we walked back. In the evening we had a lot of fun with the Swiss and the bikers, again a lot of wine, Sybil was the person who could really tell stories in a sarcastic way so you had really to laugh about her way of telling their story.

Next morning we took a taxi to pick up our Kenya visas. No problem, very fast. When I saw all the pictures in the embassy I was really looking forward to Kenya, because I had been there already several times and I liked Kenya very much. After that we went again to the Sheraton for Internet and Alexandra sent an email to her boss if it would be possible to get off for another 6 month. At the campsite Tara was waiting already for us, because when we are shopping or at an office she had to stay back. Then she was in the car sleeping. There were two other dogs at the campsite but she got along with them more or less, so I think it was not a problem to stay in the car. In the afternoon a Namibian couple arrived at the campsite.

David and Teopolina were living in the North of Namibia and were on their way to Britain. They had big problems with their Land Rover and had to wait until it was repaired. Also Fassmann arrived at Wim’s. We met him the first time in Lalibela. He also had problems with his Musso and had to get it repaired. The roads get difficult on an African trip and we hardly met people who did not have problems on some occasions. And it seemed to me the older the cars are the more simple, the less problems they had.
Next day we spent on daily routines, like household, maintenance, and of course talking with the other travelers. Bodo and Bine arrived as well. 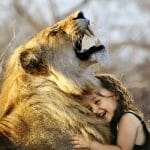 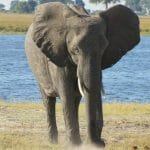