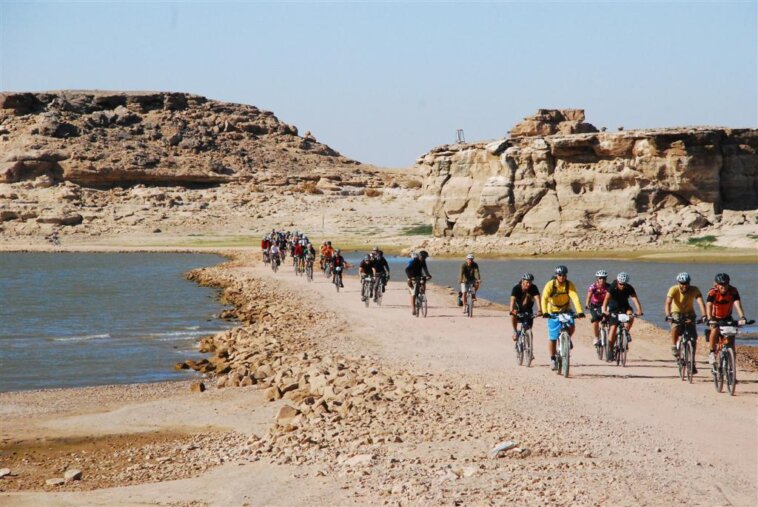 Spend some time in Sudan: Arrival together with Tara

Time in Sudan: Onboard the ferry.

I woke up onboard the lake Nasser ferry sometime in the middle of the night because they collected the passports. It was said that the police will come to the ship during the cruise and check the passports and the passenger list. So I gave the guy our passport and fell asleep again.

Time in Sudan: Sleeping on deck

I was lying at the edge of the ship, about 15 meters above the water surface of the lake. Alexandra was always afraid I could fall into the lake while sleeping. I was so tired that I did not care. The night was cold and we slipped into our sleeping bags. Early in the morning at 4 o’clock I was heavily disturbed in my sleep as the loudspeaker of the ship was loudly announcing “Allah a aquba”, “Allah is great” and suddenly all Muslim on the ship, and there were hardly any other people, except some crazy Europeans, and all of them started to turn to Mecca to hold their morning prayers.

After half an hour everybody was asleep again, except me because now I was really awake. I observed the stars and waited for the day to come, which happens quite fast so close to the Equator. At 6 the sun rose and we could have coffee, which I picked up at the kitchen. I was one of the first people, so it was not crowded yet.

The loudspeaker of the Lake Nasser ferry announced that all passengers had now to visit the doctor. We were surprised as we did not feel ill, but we have experienced that already at the Libyan border. So we went down to the physician. He was a really funny guy and he did not take all the examinations too seriously. He had a thermometer which you put into the ear to measure the temperature. Luckily there were not so many people before us because he did not clean the device after each patient. It was clear we had no fever got our stamp and were allowed to enter Sudan. When we got up again it was already warm in the sun and people slowly packed together with their self-built mosques on board.

A Sudanese guy was coming to our place. He started talking with us. He talked about Quoran and religion, he had chosen the best moment, when I have not had my morning coffee. He said I should convert to Islam because Catholicism is anyway only a subdivision of Islam and I must phone him in Khartoum he would present me a Quoran and he could help me to convert. I was not really interested, but he did not care much about it and I promised to contact him. I like peace in the morning. We were passing Abu Simbel. It looked awesome from the lake Nasser Ferry and was shining orange in the morning sun.

Time in Sudan: Overtaking the barge

At around 11 o’clock I suddenly saw our barge floating a few hundred meters away from us. I could recognize Bodo and Bine’s truck. I lent binoculars hoping to see Tara somewhere but I could not because it was too far away. At least the barge was still sailing and has not sunk, the cars were still on the barge, we could not wait to have Tara again. But it was still one hour to go.

After a while, we approached the landing bridge. We have finally got to Sudan on our African trip. We had completely different ideas of the harbor in Wadi Halfa. I would describe what I saw as an earthen bank, with an old iron shipwreck tied to the bank. And that was the place we arrived. There was no house, no building, no gate and we were not sure if this is really where we would land. But it was. First, we had to collect our passports which was quite a mess, but Mazar Mahir, a helper which we had engaged from Egypt was already aboard the Lake Nasser ferry to help with the formalities. There were three officers who sat on a table in a room of 4 by 4 meters and all passengers, probably thousands wanted to squeeze themselves into this small room. We did alike but our advantage was Mazar who had some influence and was known there so we got our papers already after an hour.

That was important because we could only unload our vehicles before two o clock otherwise we would have had to wait until the next day which was not possible because of our animals. Now we could leave the ferry. This was not so easy because, at the small door, all goods were now pushed out, along with the people. We had to fight hard to get out. Outside we were a little bit lost because we should take a bus to the customs building. Finally, we found the bus some few hundred meters behind a rock and fought to enter. Alexandra and Bine were still on the ferry because we had to be first because we had to get our vehicles. With the bus, we went to the customs building where a helper of Mazar was waiting and told us we had to unload our cars. We walked to the quay and I was so excited to have Tara again. Hopefully! When I entered the barge Tara had already seen me and was completely excited she was jumping and barking and I quickly took her off the chain.

The floor around the truck was a total mess. Everywhere was dog food and the sack which should have lasted for a month was empty except for a few pellets. Obviously, the captain was totally afraid of her and just threw the dog food in her direction. Our dog is always hungry so she had eaten up the whole sack which was intended for a month. That was what she looked like.

But I was happy to see her healthy and even that she was fat a little bit did not bother me, so I put her into the van and we were driving the customs building. Bodo did the same with the truck, also Katzmat was doing well and he was pleased as well that everything turned out well. The overlander trucks already unloaded and reckless as they were they overtook us and parked in front of us so we could not pass. Stupid guys. On our African trip, it was always the overlander trucks that made problems. The officers were very friendly again and there was no corruption at all. There was even a canteen where I bought some food while we had to wait for the passports to be checked.

The helper of Mazar, named Mehir, showed us everything which we had to fill out. Meanwhile, our wives arrived as well and Alexandra of course wanted immediately to look after Tara. Again Tara got excited and both were happy to have each other again. Mehir told us we need to have a veterinary control and he phoned the vet to come. He came, he was a funny guy, with curls all over his head, about 40 years old and said he must examine the dog now. He looked through the window of the van. Tara immediately was growling at him and barking and really got furious, because she of course wanted to defend the car. The vet got uncertain and asked whether the dog was dangerous. I did not hesitate a second, because she did not like to be examined. So I agreed and now the vet was thinking. After some seconds he said that he rather would not examine her and that I should come with him to get the papers. At his office, I was offered tea and we were sitting having tea while the vet was playing with his game boy and told the other guy what he should write. I was not sure if the vet could write or read but anyway the other guy could and so he told him what he should write down and what was the results of the examination. First, of course, I had to pay the vet, which I did, and so everybody was happy with the payment and I with the paper. I walked back to immigration but eventually got a lift by an old Land Cruiser. When I arrived the immigration hall was already cramped with people. But Mehir managed to get all stamps and we could leave. Both men had still worked with other clients so we should drive to Wadi Halfa and meet him at a hotel at a certain time. We went on to Wadi Halfa, parked our cars in front of the hotel, and waited for Mazar. When he came the police were already closed, so he told us to come in the morning again. We met Bruce and Petra and as it was already late afternoon we decided to camp together somewhere outside of Wadi Halfa in the desert, a bush camp, which we did occasionally on our African trip.

We found a nice place, we’re sitting together, had some meals and Bruce donated his last bottle of wine to us. They told us that he was of South African origin and Petra was from German immigrants living in Windhoek, Namibia. They were on a trip home to visit their parents because they were living in Britain and had not visited them for a long time. Tara was excited that everything took its normal course again and was happy to stroll around in the desert and we were happy that we had left the Lake Nasser Ferry finally. 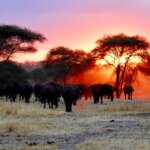 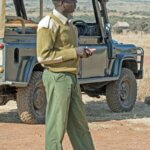